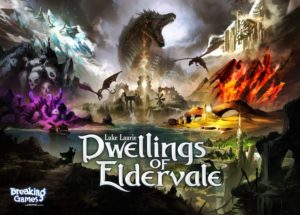 It isn’t much of a secret that I like epic games. I want a majestic experience that I can dig into on a game night, spending a few hours planning out vast strategies and fretting about each move from my canny opponents. I want to claw my way to victory and never quite know where I am on the road to success. I want a game that is too complex to analyze, yet begs me to try. Fortunately, like I said, this isn’t really a secret to those who know me.

A few months ago, I was given the opportunity to try out a new game prototype by a friend clearly rubbing his hands with absolute glee. I looked down at the table and saw a colorful array of resources, meeples, miniatures, and dice, all surrounding a hex grid revealing the land of Eldervale. I had eight elemental factions to choose from, each with unique abilities for my small army of meeples, and told that I was about to play a worker placement, area control, tableau-building game. Disbelieving, I sat down to my first game of Dwellings of Eldervale, by Luke Laurie and Breaking Games. I lost that game, but I won the next one. I’m about fifty percent in the ten or so games I’ve played since then as well, and I am hungry to play even more.

Think about how many games on your shelf have been played more than ten times? For me, it’s a short list: Betrayal at House on the Hill, Spirit Island, Codenames, Splendor, Lords of Waterdeep. Already, Dwellings of Eldervale has launched into the short list of my favorite games, which is pretty impressive for only having just launched on Kickstarter this week! (The conversation below might make a little more sense if you know more about the game, and this preview by Tantrum House is one of my favorites!)

So what exactly makes Dwellings of Eldervale satisfying for a game theorist?

1. Multiple Paths to Victory: The first thing a player has to do when they sit down for Dwellings of Eldervale is decide where in the world they’re going to try and focus. Dwellings of Eldervale has a wide variety of ways to gain victory points and each one is built around a different mechanic within the game. Placing workers in the elemental realms gives players the opportunity to dwell, gaining a permanent advantage and area control. Other players might instead focus on building their tableau, trading resources to gain unique powers and abilities. Some of these choices depend on a player’s personal taste, but some of the elemental factions have that might do better with one strategy than another.

Take one of my favorite factions, the Embercrush Ogres. 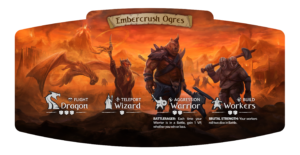 Each faction has four types of units, each with a different amount of dice in battle and two unique abilities!

Each faction has different abilities, and the Ogres have a powerful one. Each of their workers adds an extra die in combat, making them a constant worry for other players from the very first turn. Combat is another major way to gain victory points and control the board, so the Ogres have a huge ability to control the early game until other players can catch up to their battle prowess.

By giving players so many choices in how to initially approach the game, Dwellings of Eldervale becomes highly replayable. I still don’t have a favorite faction, nor do I have a favorite strategy. This game begs you to try new tactics in new ways in the constant quest for victory.

2. Resists Dominant Strategies: At its heart, Dwellings of Eldervale is about building an engine to generate victory points. However, it doesn’t feel like a race in the same way that a tableau-builder often feels. If a player seems to be doing too well, the other players can use the game board itself to start making damaging moves. No portion of the game exists in a vacuum, which leads to extreme competition throughout the game. 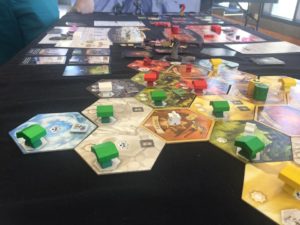 As your worker become a dwelling, they get their very own roof! Photo by Dwellings of Eldervale designer Luke Laurie.

A major part of the game is the regroup action, where a player removes their workers from the game board and returns them to their ready area. On their way back, a player uses each of these workers to activate their tableau abilities. The more workers a player has to regroup, the more they can do with their tableau. If a player is focused on building their tableau to the detriment of area control, then an opponent may be able to start battles and send those poor meeples to the Underworld before they can be regrouped.

Meanwhile, players also have the opportunity to gather cards from the magic deck, which are full of fun and interesting spells letting you wildly change the game. The deck is also filled with Quests and Prophecies, allowing you new ways to gain victory points, either at the beginning or end of the game. Even though each card may only offer limited amounts of points, completing many of them in a row can lead to a healthy swing by the end of the game.

As this long list of complications increases, it becomes almost impossible to determine an optimal strategy without trying to do a little bit of everything. I have to develop a mixed strategy if I have any hope of winning the game. In a mixed strategy, I am forced to constantly change my actions with the intent of forcing my opponents to mix theirs as well. If other players know my plans too well, they can try to place their workers in the perfect locations to thwart my every move.

3. Constantly Changing Game State: As a game of Dwellings of Eldervale continues, the board is constantly in flux. The hex grid expands as players explore the world, constantly adding new resources to gather, locations for dwelling, and even huge, terrifying monsters to battle. None of these things can be easily predicted, meaning a player’s strategy may shift at almost any time.

But even from the very first turn, a ton of variety comes from the eight decks of adventure cards.

Cards from the adventure decks are available for purchase, as long as a player has the proper resources. These are placed into a player’s tableau, granting them new abilities and options as the game progresses. However, the different elements don’t require entirely unique resources, so the potions a player gathers can be used to purchase cards from four different elements. Since only one adventure card is shown at a time from a given element, players can battle over specific elements and abilities throughout the game. The fun here is that by choosing an opponent’s elements, you limit their power in the game overall.

Sometimes, when I play a game, I just want to have a good time with my friends. But when it comes to an epic gaming session, I’m looking for the opportunity to test myself against my opponents. Dwellings of Eldervale gives me that chance in a way that I haven’t been excited about in a long time. Every game is a new experience, with factions and adventures I’ve still never tried, and I can’t wait to get out there and play again.

If this article got you even a little excited about Dwellings of Eldervale, check out the campaign before it leaves Kickstarter on July 25th!