A few years ago, I met up with a group of friends to playtest a groundbreaking new game. Everyone sat at the edge of our seats as we cut out cardstock tiles and reviewed the rules, because this was going to be the start of a new craze—the asymmetric game. Each of us would be playing the same game, but we’d have different goals and abilities as we battled for victory. Truth is, none of us really knew what that meant.

“So it’s like playing Tag, and one of us is It but the rest are all trying to run away?”

“What about Magic? Is it like you’re playing Big Green Monsters and I’m playing Blue-White Control?”

“Or maybe it’s like playing World of Warcraft or something? We’re all different classes but we all hit the same buttons to do things?”

“What exactly are we playing here?”

Since then, I’ve started to come up with some answers to these early questions. I’ve played a few, and generally an asymmetric game comes in one of a few categories. From games like World of Warcraft (cooperative games with similar goals but differing styles) to Tag (competitive gaming with very different goals and styles), asymmetry presents in a few different ways.

“May the odds be ever in your favor” 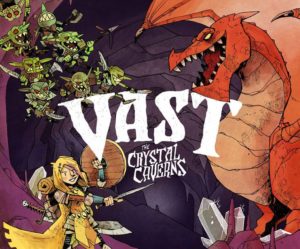 That playtest with the tiles in the basement? That was my first introduction to Vast: The Crystal Caverns, the new asymmetric hotness that was preparing to take over the gaming world. In Vast, each player gets their own role, pieces, player board, and their very own rulebook. That’s how crazy this game needed to be to make asymmetry work.

Here’s the brief rundown. The Knight is trying to kill the Dragon, who just wants to rise from its slumber and escape the Cave. The Goblins want to trap and kill the Knight, while the Cave wants to trap everyone inside for eternity. Then there’s the Thief who just wants to grab a bunch of treasure. At any moment, one player is closer to their own goal and needs to be reigned in by a team-up of the other players. This leads to a lot of temporary alliances as everyone jockeys for position and final victory.

Vast delved into asymmetry by also making the mechanics extremely different for each role. This makes each play a wildly different experience, but it also means that each time you play, you basically have to relearn the intricacies of the game from a new perspective. The Knight has to explore to gain items that increases their stats, but the Cave is choosing how to build the board in order to lay traps for the other players. For new players, this is very frustrating.

The team behind Vast is also working on two other games, Vast: The Mysterious Manor and Root. I’ve only played an early prototype of TMM, which continues the theme of its predecessor (playing the Manor is amazing), but Root has branched out into another path. Players in Root all have similar abilities, though different goals. Well, at the very least, each player is using a different kind of game mechanic and engine, but the specific details of battling around the map are very similar. This has the effect of making it easier to learn and play, but also muddies up the distinctions between player roles. I’m excited to try it out more to determine which game hits my table more often! 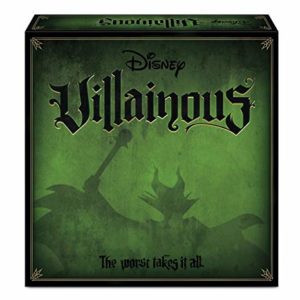 When players aren’t directly competing, it becomes a little bit easier to give people wildly different gameplay. I was a little shocked at how much I enjoyed playing the new game Villainous, a game licensed right from Disney. In this game, each player has their own board as they take on the role of a famous Disney villain and attempt to play out their own evil plan. As the cunning Jafar, I searched for the Magic Lamp in the Cave of Wonders, using it to summon Genie, and then Hypnotized that magical being for my own nefarious goals back in my Palace. At the same time, the Queen of Hearts was trying to turn a bunch of Card Guards into Wickets for a wild game of croquet over on her own evil board.

As we battled our own tales, we sometimes had the option of adding some drama to our opponents’ stories. Each player had a Fate deck full of heroes and other acts of goodness which would make it that much harder for a Villain to succeed. The Villains would have to stop their plan to deal with this Fate in order to get back into the swing of evil.

What I enjoyed about this design was that even though each player had their own rulebook, they were trying to do things we, as Disney fans, already understood. The mechanism might be strange, but my goal was exactly the one I remembered from the movies. This led to an experience that was remarkably successful for a game that seemed to be built out of such disparate parts.

“With our powers combined…”

My favorite subset of asymmetric play is the one where everyone needs to hold up their end for the team to succeed. For example, I was obsessed for a long time with an MMO called Puzzle Pirates. As we sailed around on tiny little shipping runs, there were four different puzzles that kept a ship moving. My goal was always to be the best at the sailing game on the entire server. Did someone want me to do carpentry instead? Or bilge? Instant mutiny. I wasn’t bad at navigation, but sailing was the dream. And the better I sailed, the faster our ship soared across the sea.

A bad sailor set your ship adrift. But so did someone bad at bilging or carpentry. If your crew wasn’t the best at something, you’d put multiple players on the same task. And then, to make me feel incredible, individual results were posted every few minutes, just to keep us invested on being amazing. 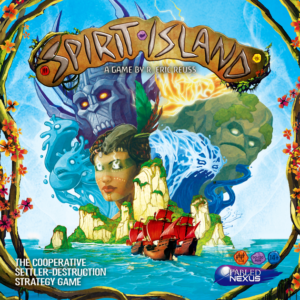 That feeling is harder to apply to a board game, but easily the top of the pack is the fantastic Spirit Island. In this “Reverse-4X” game, you play one of the island’s spirits, fighting back against the colonialist invaders and sending them back into the sea. Each spirit plays in a totally different way, with some focused on creating Fear, some manipulating the beasts and native Dahan, and others simply burning those invaders to the ground. As the game progresses, each Spirit is capable of more and more, which makes it very important for each player to be on top of their game. The invaders are tough, and routing them is going to take a concerted effort.

In some cases, the game makes it impossible for certain spirits to affect certain spaces on the board. Without beasts to manifest from, Sharp Fangs Behind the Leaves is locked out of the more developed locations. A Spread of Rampant Green has the most impact in Marshes and Wetlands. Ocean’s Hungry Grasp is a coastal spirit, able to destroy invaders along the shoreline, but has little power to affect the interior. With wildly different spirit abilities, weaknesses, and a pile of invader scenarios and difficulties, Spirit Island is a true test of cooperation.

When it comes down to it, the weirdest thing about asymmetric games is that they’re the ones we’re really used to in the real world. We’re used to playing with different abilities, coming from different backgrounds, and with massively different goals in mind. We grew up with them. They resonate with the stories we tell. The strange idea is actually the one that says we’re all the same and all trying to get to the same place. Asymmetry is normal. It just took board games a while to catch up.