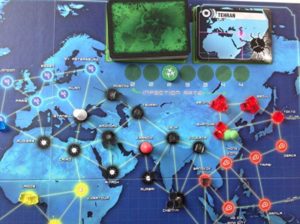 As I wrap up final production on the Puzzle Keyring this week, I’ve spent a lot of time thinking about why I was inspired to make it in the first place. I enjoy puzzles and codes, of course, but there are different ways to show that passion. I could have made my own puzzles or designed an escape room. So why did I decide instead to create a teaching guide for new players to experience the joy of solving puzzles? Because I remembered how it felt to fail.

One day, I sat at a picnic table with three friends just outside Multnomah Falls. As we’d hiked up to see the waterfall, we’d been handed a series of beaded necklaces. The beads were of all sorts of different colors, and while we saw some repeated combinations, there wasn’t an overall pattern. Finally, we received a burned CD filled with Madonna songs. Mystified, we sat at the table and listened to the tracks, hoping there would be some secret code hidden inside, because the necklaces seemed terrifying.

We eventually figured it out—the colors were resistor code, the groupings were frequencies, the frequencies were notes that matched the Madonna songs. While I like to describe that solve sequence to friends as an example of how complicated and inspired these puzzles can be, I also can’t help but remember my frustration on that afternoon. We were playtesting a 36 hour puzzle event called Wartron, and the other two teams had tons more experience than our rag-tag little team. We knew they were ahead of us. We knew that our supervising member of Game Control was silently sitting with us, watching our struggle. We also knew there wasn’t much we could do about it.

Failure is a tricky thing. Our bodies train us to avoid it with fear and pain responses. In the real world, failure often has consequences as well. And yet, there are lessons that can only be learned through failure. Lessons about resilience, introspection, and self-development. We play games our whole lives just because they give us a safe space to learn these lessons. It’s almost a tragedy when all we do is succeed. We need to fail. 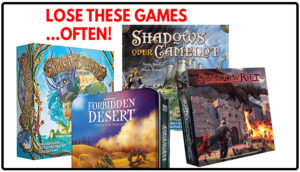 Playing and losing cooperative games is such a perfect way to experience failure. You and your team fail to stop the shadows from taking over the Round Table, or you let the Frost Dragons destroy your little town. Now comes the best part—you and your friends can talk about losing. Failure forces you to look at what you did and see how to do it better. How to find your own success. Maybe this time, you keep all of those explorers out of the center of your Island! (BTW, that’s exactly how you need to play Spirit Island. –Rich.)

So Wartron? My team and I floundered for hours in the face of codes and puzzles we’d never seen before. The other teams were so far ahead, they may as well have been in another game. Suddenly, things started to click. We learned new techniques and began to recognize similar mechanics. I could look at a puzzle and know how to the find the solution, and if I couldn’t, someone else on my team could. We found our second wind and eventually caught up to the other teams. It’s been years since Wartron, and I’ve never forgotten that satisfying thrill of pulling into the lead.

These days, I’m not too worried about getting stuck on a puzzle. Sure, some of that is from that moment where the switch flipped in my brain, but so much more is just from all of that failure. It taught me how to get back up. So now, when someone shows me a brutal cooperative game that just crushes us in the first round, I get amped up. The best thing anyone can learn from failure is that burning desire to set the game back up and play it again.