Over Thanksgiving, we shared Clank! In! Space! with some friends of ours and I had a few moments of absolute terror. What if the game was too hard? What if they hated it? What if they stormed out with all of my favorite leftovers?! It ended up being just fine, but I was very concerned that I’d picked something that was a little too complex. Judging a new audience for their tabletop savvy is always difficult, but it becomes even worse around the holidays. When I want to share my love of games with folks who don’t play this kind of game, what do I pick? 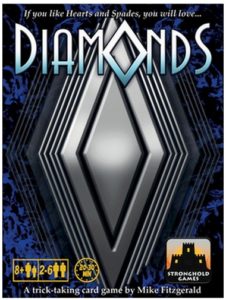 Trick-Takers: For families that grew up playing Hearts, Spades, Bridge, or Euchre, Diamonds is a perfect step forward into tabletop. The rules of the game are similar to these classics, but each suit has a unique interaction with the game itself as you battle over a hoard of diamonds. Whenever you win a trick with Diamonds, you pick up one of the diamonds from the hoard and place it into your Vault. When you win with Hearts, you pick up a diamond and place it in front of your vault in the Showcase. Spades lets you transfer diamonds from your showcase into your vault, and Clubs allow you to steal from other players. Suddenly, everyone is playing to take specific tricks which allow them to perform the actions they want. It has multiple strategies that everyone can understand after only a few tricks. Plus, there are victory points! Every diamond in your vault is worth two points and every diamond in your showcase is worth one each. Diamonds is a fantastic game for families who have been playing games for decades! 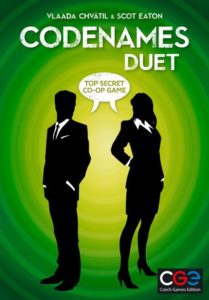 arty-Party: For a brand new group of gamers, it is hard to find a game as good as Codenames Duet. This brilliant take on the original asks every player to be both the clue giver and the clue guesser during the same game. Like the original, you have a series of 25 words in a grid that need to be sorted through to find the spies among the passers-by. However, in this version, all players split up into two teams, and each team gets their own map that tells which of the 25 words are spies. The map is double-sided and each side is different! There is always some overlap, which can be useful, but there are also a limited number of turns to finish the game. If all the spies from both teams are found, everyone wins! Otherwise, everyone is going to have to try again. Duet eliminates the competitive aspect of Codenames in favor of a limited information approach to cooperation that depends on tactical play. It’s a quick and easy introduction to games and I constantly see brand new players be completely immersed by the second game. 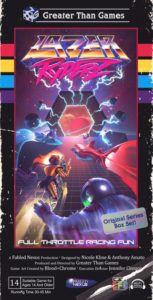 Light-Cycles?: Look, sometimes you just want to play a game that enthralls new players because it’s so dang cool. That game is Lazer Ryderz. First off, the incredible box is designed to look like a boxed set of VHS tapes straight out of a 1980’s neon-soaked action movie. As you open your individual box, you are met with a bunch of tracks, both curved and straight, that represent your movements in the game. What does the board look like? It’s just whatever table you might have. You can add obstacles if you want, but the important thing is to set down a few score tiles. Players score points when the fly all the way through these tiles. Of course, there’s also the fact that you’re basically riding light-cycles. Like in TRON, you leave a wall of light behind you, and when other players crash into it, they have to restart from the table’s edge! The first player to collect three score tiles wins! The game is super easy to get into and the strategy is clear right from the start. Plus, it’s got just enough randomness to make every single move a risk. I’m a huge fan! 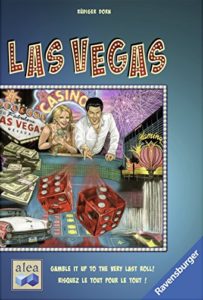 All-of-the-Dice: A family raised on Yahtzee and Boggle loves shaking up and rolling a bunch of dice. So why not play Las Vegas? In this game, every player has eight dice they get to roll! EIGHT! On each turn, a player rolls all their dice and picks one of the six casinos. Each casino is labeled one to six, and when you choose a casino, you take every die with a matching number and place it on that casino. On your next turn, you roll your remaining dice and continue the process. At the end of the round, the players see who has the most dice of their color on each casino. The winner gains a large amount of money! Potentially, second and third place earns a lesser amount, but they may also get nothing. If two players ever tie on a casino, neither one gets anything! This game has an incredible amount of strategy for such a simple, simple setup. Highly recommended.

That’s it! Next time you head over to see some family or friends who aren’t quite game people, bring one of these along. Not only will you get to play something simple and straightforward, but you’ll be able to continue some serious strategic practice.