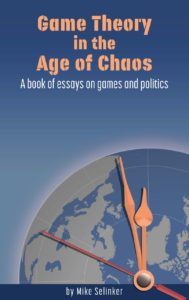 Before you get started on this article, let me ask you two questions. Do you like game theory? Do you dislike what the current administration is doing to this country? Great. Get this book. With that out of the way, let’s get to a heartfelt blog post.

PAX Dev is an incredible opportunity for game designers and developers of all stripes to come together in a convention filled with great panels and workshops that really help build up our industry into the best thing it can be. I’d tell you more about it, but I can’t. It’s a black-box convention, which means that anything presented or discussed there is off-limits to the press or to the outside world. This safety measure is a huge benefit to making changes in the world of gaming. So while I can’t talk about much of what happened beyond my own presentations, I can mention one major event that took place during the closing panel of PAX Dev 2017. Mike Selinker led an incredible lineup of people in discussing the impact game creators can make in the world around us. I stood up and talked about how helping students learn about game theory and solve conflicts was something that felt more meaningful every day. I felt lucky to be part of it, both as a presenter and as a witness to that massive event.

With that in mind, Mike continued to write essays which attempted to explain the events of the day with his background in games and tactics in full force. His essays dug deep, explaining the antics of the current administration in terms that every game player could understand. Mike studied the politics behind the wall, nuclear standoffs, and reckless trade policies, each with in-depth research and analysis. Far too soon, Mike had more than enough material to publish the essays as single collection—a clear intersection between game theory and the political landscape we see every day. Each essay feels like a clarion call that breaks down the seeming chaos and attempts to find the underlying strategy and order.

As a game theorist, I’ve been keenly interested in these essays, so I’d tell you to grab a copy of Game Theory in the Age of Chaos for Mike’s words alone. However, each of these essays also includes a short section of my own, which helps to illuminate the game theory with a second voice. I’ve run through and explained important basics like utility theory and the volunteer’s dilemma, but also larger topics like veto power, armor theory, and the gambler’s fallacy. My hope is that you walk away from this book with not only a clearer understanding of the current administration, but also a great primer on some of the most important ideas in game theory. Both of these things feel more important every single day.

Sure, we’d love to just apply game theory to our favorite games, but the field was crafted specifically to explain situations in politics and economics. Mike has done heroic work binding the two together, and for a short time, you can get your own copy for one cent, as long as you donate $25 to the Democratic Party. It’s hard to imagine a better analysis and guide through the chaos that has become our everyday political lives.

Like Mike says, “It’s better than screaming all the time.”