Anyone who knows me must be aware of my love of role-playing games. Besides writing my own D&D content on the Dungeon Masters’ Guild, I’ve also been telling my own stories in campaigns for decades. Getting a group of people in a room to collaboratively build a tale of heroics and derring-do? It’s an incredible feeling. And it really doesn’t matter if we’re running through a story of my own design or I’m getting to share in someone else’s playground. This is easily my favorite game of all time. 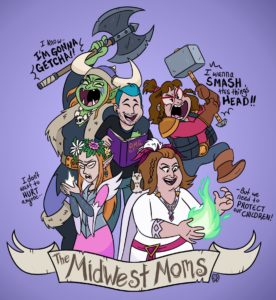 Have you watched the incredible Xander Jeanneret lead his adventurous mother and her amazing friends through a story? It’s an absolute delight.

These stories work so well because while most of the people at the table are embodying a single hero, one of them is playing the entire world. Imagine that. They have to hold together the strings of an entire populace filled with quirky characters, a landscape dotted with towns and dangerous dungeons to visit, an endless array of powerful foes, and the reins of a story leading a party throughout the world in an order that is fun, engaging, and narratively interesting. Yeah. Being a Dungeon Master is hard work. So what if a computer could do it for you?

Two years ago, I was introduced to a massive tabletop game called Mansions of Madness. Similar games, like Descent and Hero Quest, had a similar theme: a group of heroes battled to win against the vileness of the game itself. However, in order for the game to work, one player would have to switch teams and play as the game itself, running monsters and events to challenge the heroes in their quest. If the chosen player was particularly mean, the experience for the heroes could be dramatically different than if that player was being generous. (Look, I said I was sorry!)

This is an easy example of the Volunteer’s Dilemma, where one player must choose to play a slightly different game than everyone else for the good of the group. If the heroes win, the chosen player doesn’t necessarily gain the same sense of satisfaction. More than likely, a heroic victory is a result of the volunteer’s plans and resources falling through. In order to make the game a challenge, the volunteer has to truly try to win, meaning someone is going to lose this game.

A few games tried to break away from this trend, but were forced to design a fair mechanism to create a mysterious, changing game that wouldn’t be stale after a single play. Arkham Horror did this through a mountain of potential cards, locations, and choices that left players fundamentally unable to play the same game twice. Castle Ravenloft added a monster strategy system that forced players to choose the least damaging option from a short list. In a strategic sense, each of these systems can be broken by a player who studies the game and can find efficient and safe routes to victory. (Look, I said I was sorry!) 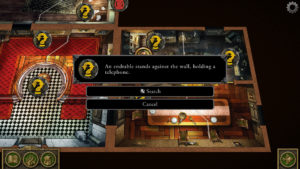 Mid-mission in Mansions of Madness, Second Edition with tons of exploring left to do!

The second edition of Mansions of Madness comes with a fantastic app, allowing everyone to play together while the pre-programmed adventures tell the story. Fantasy Flight Games has done an amazing job of creating a randomizer which mixes up the ways in which a skill test can be resolved. The app asks for a few inputs, like are you attacking the creature with a spell or with a bladed weapon? Once you type in the answer, you’re committed, and the app will ask you to make a specific check which might not be the one you’d expect.

Maybe you’re attacking nearby Deep One with a spell called Wrack, which is usually governed by your Lore ability. Rather than a Lore test, the app might ask you to make an Agility check to dodge out of the way of your opponent’s thrashing limbs during the casting process. If you are successful, the app then tells you how to deal damage to the creature. 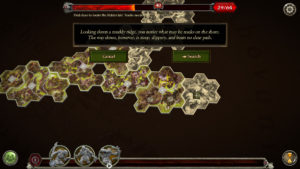 Mid-mission in Lord of the Rings: Journeys in Middle-Earth, with so many places to search for the remaining tracks!

Suddenly, I’m engrossed in a game where I don’t know exactly what’s going to happen. The app has given me the illusion of a game master making a series of choices that I can’t quite predict! Sometimes the moment acts in my favor, but other times…

The new Lord of the Rings: Journeys in Middle Earth app acts in the same incredible way. While the games uses cards instead of dice, the app itself is a brilliant randomizer that gives keeps the game feeling fresh as it hands players new surprises every round. After playing the first adventure a number of times, each run has a similar goal, yet adds interesting and unique details to the map that add just enough mystery to keep me on my toes.

Video games and tabletop games allow for wildly disparate mechanics to take place in a single game. Learning how to make a hybrid game to find the best of both worlds is going to take some real effort, but Fantasy Flight Games is making huge strides with both Mansions and Journeys to build something incredible. As more and more game companies start building their own hybrids, I am hopeful that we’ll be able to bring the thrill of the roleplaying game experience to the regular tabletop game night!