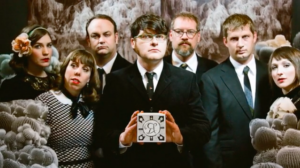 Illimat is a wonderful new board game, developed as a collaboration between prolific game designer Keith Baker and prolific musicians The Decemberists. Years back, the band members shot a series of promo photos with an arcane looking game board, provoking a sense of deep mystery amongst their fans. The object, known as the Illimat, was covered with strange sigils and odd patterns, and generally looked unlike any other game. Eventually, these two Portland-based creators met and decided to build a set of rules to turn this mysterious object into a playable game—and Illimat was born.

As someone who demoed Illimat many times at different conventions, I grew used to repeating a few quotes about the game. “It feels like something you’d find in your grandmother’s attic.” Which is both an intriguing phrase and absolutely true! Illimat is based on classic cardgames called Cassino and Scopa, giving it a feel very different from most modern board games. 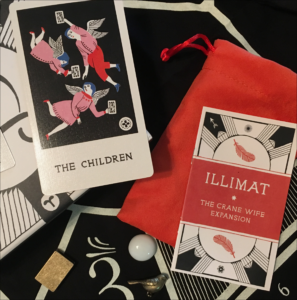 The Children love to steal your Illimat cards.
Art by Carson Ellis

In most games we play these days, designers fight to avoid wasted turns—no one should have a turn where they don’t change the state of their hand or the game, right? Some deckbuilders have unfortunate turns when you don’t buy anything, but these are far and away atypical moments in the game. On the other hand, the Illimat endgame can feel a lot like a round of Hearts. If most of the hearts were thrown out in the middle of the round, the end has little value for any player. Likewise, if a player realizes they cannot take any of the remaining tricks, they may as well play with their cards face-up. In Illimat, the last few turns can be filled with throwaways that have no impact on the final score.

During my demos and subsequent plays of Illimat, I found that this endgame feature, built directly from the classic games I grew up playing, often frustrated new players. With that in mind, I wanted to delve a little bit into the mechanics of Illimat and see exactly where to find the point-grabbing action. Some of this analysis is from my personal experience, so may differ from your experience based on playstyles.

Every time a player takes a turn in Illimat, they may take one of three actions: Sow, Harvest, or Stockpile. Each of these requires a single card in hand to be played into one of the four quadrants, or fields, on the board. In a two or three-player game, there are four suits of thirteen cards each, while a four-player game adds a fifth suit. The most used action is Harvest, which is playing one card from your hand to Harvest a card with the same number value from a Field. Both cards are then added to your Harvest pile. When Harvesting more than one card, all of those cards are added to your Harvest pile. 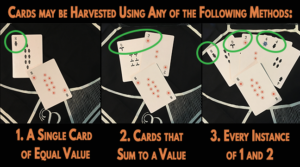 Harvesting is absolutely an opportunistic action that is not always available to a player, which means it pays to be efficient. The more often I can grab two or more cards in a single action, the better off I am. At the end of the game, the player who has Harvested the most cards gains four points—by far the largest source of points in the game. In most games I’ve seen, the winning player has Harvested from 16 to 24 cards.

Whenever a field is completely cleared, a quick check is made to see if it should be reseeded with three new cards from the deck. Reseeding adds more options to the board, while simultaneously reducing the number of turns left in the game. Reseeding can happen anywhere from an unlikely zero to an equally unlikely seven times.

In an average game, it feels unlikely that you can drastically ramp up your Harvesting efficiency beyond an average of 2.0 cards per turn. More than that would take an impressive streak of good luck! Depending on how often you can Harvest and how efficient you are, you can likely Harvest the following number of cards:

There is a very interesting thing to notice on this table, which is the moment when Harvest efficiently become a better source of cards than Harvesting constantly. Finding powerful ways to Harvest multiple cards per round clearly leaves you with extra turns when you don’t need to Harvest at all—including those final rounds!

Here’s the moral of this particular story: Illimat is a game about Harvesting efficiently at opportune moments, not slowly ramping up to a powerful Harvest-filled endgame. This efficiency will leave us with turns that feel wasted, not because we aren’t playing well, but because the game doesn’t require us to have great opportunities every single turn. We can create those moments by Stockpiling (an action requiring a post all on it’s own!) but us simple farmers need to be ready to capitalize at any moment.

I love playing Illimat and I have been very fortunate to be part of the playtest process for a long, long time. Beyond the incredible art by Carson Ellis and the fantastic theme and mystery given by The Decemberists, the gameplay created here by Keith Baker will keep me embroiled in the complicated act of farming for years to come.