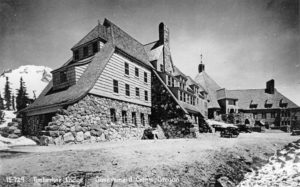 Confession time. I cried during E.T. Not because of the sadness of that poor lost alien flying back home but because that movie is terrifying. The scene where they set up the huge white tents and get set for dissection? Tiny little me just couldn’t take it. I’m no good at scary things! I close my eyes in the Haunted Mansion at Disneyland, for crying out loud. So I was the obvious choice to help design a game for Oregon’s latest festival of terror.

The Overlook Film Festival is a convention dedicated to the complete experience of horror. And so, OFF was held at the perfect venue: Timberline Lodge, famous as the setting for The Shining. Not content to simply let attendees sit around and watch movies, OFF brings in immersive projects that showcase the thrill of personal terror. So of course, there was timid little me helping develop the Immersive Horror Game.

Together with Dylan Reiff and the incredible team from Bottleneck Immersive, I helped design a four-day mystery experience, tracking the rise of a serial killer during the Festival using a clever set of puzzles and immersive moments. With some help from a bitter detective, a cheerful historian, and members of a secret society, we sent players across Timberline Lodge and Government Camp, searching for our devious little puzzles and special interactive moments.

Take this odd-looking cipher. Each of the main players received one fragment of a three-part piece of paper, carefully left in their hotel room. We used this mechanic as an icebreaker, so solvers would find each other during the festival. Once they put it together, they saw two major encrypted phrases. Along the top, a mixture of Morse code and the Freemason’s Cipher, which sent them to find a specific page in a specific book. But the second was entirely unclear. Was it five words? Was it five phrases with no breaks? This resisted simple decryption techniques, and players were stuck until more information came their way.

Well, the page in the book led to a phone number, which led to a person who recalls some strange code language, which eventually led to a fax machine at the Lodge with the decryption alphabet. Based on the Mary Queen of Scots cipher, this has extra characters for spaces and symbols representing “doubling the next character.” This second code had been intentionally time-locked, and gave additional story for players during the event.

Like escape rooms, games like OFF have a very different design goal than events like Puzzled Pint or DASH. Puzzles have to be shorter and created without a focus on master puzzlers. Puzzles should also be immersive, with solutions that could be easily found in the environment without having to use the internet or simply crunch data. Plus, the puzzle needed to be more about the experience than just finding the solution. Everything within the OFF Horror game was carefully crafted to lead to new ideas and new information, eventually allowing players the agency to talk to major characters become part of the story.

Overall, OFF was AMAZING. I hardly slept while I was there, since there was always something to do. And really, I can’t think of another event experience I’ve been involved in that has given me such an intense feeling of satisfaction. With tons of incredible improvisers and actors, a fantastically creative production team, devoted and detail-oriented management, and thoughtfully designed games and puzzles, I can’t wait until I get to do something like this again.