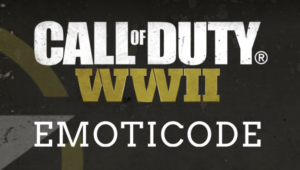 Last week was the culmination of mountains of research and development as my team and I launched the Emoticode, a three-day livestream on Twitch promoting the release of Activision’s Call of Duty: WWII. Over the course of those three days and eight hundred-thousand views, thousands of players competed to crack a series of forty-five ciphers, with solvers gaining a beta invite to the game. In the end, my devious ciphers stood up to the onslaught for almost fifty hours, and they would indeed have been doomed without me watching for the perfect moment to drop just the right hints.

At a baseline, each of the ciphers had to stand up to random brute-force attacks by hundreds of guessers for at least an hour. Meanwhile, they still needed to be solvable by fans who had potentially never cracked a cipher in their lives. Best of all, the cipher would be transmitted only by a series of blinking emotes in the Emoticode typewriter with no direction or guidance unless a hint was needed. A wide web of impenetrable difficulty until a solver can find the single, clever way to break through.

This is the kind of challenge I enjoy the most. 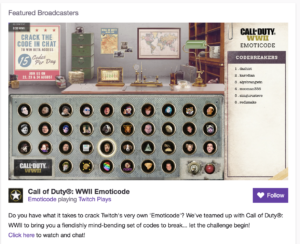 It turned out that the solution to this challenge was scaffolding. You probably remember this from your math classes—you studied addition, then learned that multiplication was just like adding, but faster! Your skills leveled up over time. When we build a proper scaffold, we allow players to build their skills. Which is why you should play Lords of Waterdeep before you take a crack at Agricola. But back to codes… 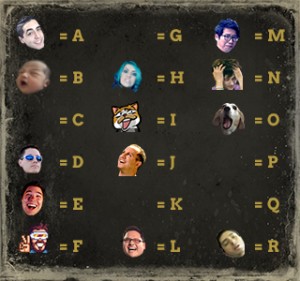 Our first ciphers were the simplest. Starting from a few hints, players needed to translate the Emotes into letters and numbers. In this alphabet, you might get emotes that translate to ?A??IN? and have to come up with the right solution. Since you know most of the letters, those ?s would have to be C, G, K, P, or Q. G is a good guess for the last letter, and soon we’re at !solve PACKING and victory. Of course, it wasn’t quite that easy, and it instantly got harder.

Before too long, we moved into simple substitution, like the Caesar or Atbash ciphers. Not much harder, but then we’d do some transposition, like a Rail Fence or Columnar Substitution. And then? We’d start doing both at the same time. I’d throw in Braille or Morse Code to keep things fresh, and then dig into some Binary or Hexadecimal digits. By the end of the Emoticode, our top solvers knew every single one of these types of ciphering systems, plus Vigenere, Playfair, and One-Time Pads. It was incredible to see these brand new solvers have a series of tricks they could bring out to try against my ciphers! On the other hand, if I’d started with a Rail Fence Hexadecimal Atbash puzzle, absolutely none of this would have ever occurred.

Scaffolding is something I learned as a teacher, but you often see it in board games as well. The extremely new Apocrypha has a pre-wrapped deck that you are meant to play without shuffling at all! A video guide helps lead you through the scenario. Once you play those early missions, additional rules and features can be tacked on to make things difficult in fun ways, not just through complexity and obfuscation. One of my favorite games in the world, Race for the Galaxy, fails to do this, and I have the worst time convincing new players to take a chance on the game.

By the end of the Emoticode experience, I’d written forty-five ciphers and spent almost that many hours moderating Twitch and Discord servers filled with people trying to solve my devious codes. A group of solvers banded together and are now looking for more puzzles and codes to solve as a new team! For a guy who teaches Cryptography, this was the perfect outcome. Along with my immediate twenty straight hours of sleep.

(And no, this was not a trial to get into the NSA. As I kept getting asked on Twitch every ten minutes.)