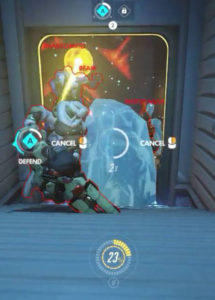 Folks, I was so good for so long. I didn’t buy Overwatch because I know myself. As soon as I picked it up, I knew I’d dive in and battle my way up into the competitive levels. I can’t help it—I don’t want to help it! I love playing FPS games, and once I get started the only thing that gets me to stop is the eternal knowledge that rent is coming due.

So I waited until the school year was over and decided to devote a portion of my summer to learning this ridiculous and wonderful game. Immediately, I found myself in a situation like this one.

This picture shows the inside of a spawn area. Spawn zones are protected by yellow forcefields which keep the enemy from stepping inside. The blue team is attempting to get outside of the front door, but the red team has it barricaded. When the blue players die, they respawn nearby. When the red players die, they have a long hike to get back to the battle. Even so, a few capable players can keep the entire enemy team locked up for the five minutes it takes to win.

Ready for a wild opinion? This situation is bad for the game and should be fixed. Maybe with something like this:

First off, let’s agree that this situation, one where more than half of the match is over and one team can’t get out of their spawn, is a broken game. Sure, that team might escape and maybe they’ll even make it to the objective and turn this into a real match. But right now, this game is super lame, and there’s no indication that it’s going to end.

What happens to players when a game is broken? They give up. If they aren’t playing with friends, they drop out of the game, because they’d rather start a new one that’s more fair. This broken game is totally demoralizing to the losing team. So we’ll plan to fix the game as soon as this occurs (This introduces a new problem, but let’s hold on to it for a minute). Let’s say that game is Broken when one team is trapped in their base for more than two minutes, the match is half over, and one player from the trapped team has left the game.

You know what kind of game I do like? Games with Betrayers. So let’s make things interesting. As soon as one player leaves, we do this. 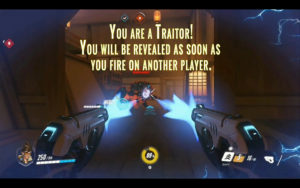 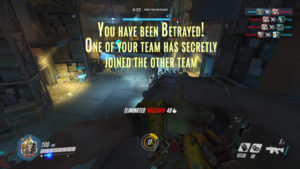 What happens next? The stronger team immediately becomes weaker but they don’t yet know how. Overwatch is a game about team balance, so suddenly losing a healer or a tank can severely change things. Even losing a major damage dealer allows the other team a huge opportunity. While the strong team is trying to figure things out and possibly take down one of their former teammates, the trapped team has a new chance to break out and make the game a little bit more fair.

Will this put the game back to normal? No, but we already assumed the match was broken and our goal was to make it more interesting for players. It gives some hope back to the trapped team and keeps the trapping team on their toes. Of course, it also adds a new problem. Teams with hope don’t have players who get frustrated and drop out—they have hope! If no one leaves, what happens then? We could trigger this mode before a player drops, but then it’s 7 vs 5 instead of 6 vs 6! Can this problem ever truly be solved?

Let’s call this a work in progress… I’ve got some more Overwatch to play right now!